Dear Friends,
Last week I was away on vacation, and I used the opportunity to catch up on reading that I've long been meaning to do. I'm a devotee of historical biography, in part because I believe that history informs wise decision-making today. One of the books that I digested last week involved a heated dispute between leading members of Congress and the sitting president of the United States, John Tyler, in the early 19th century. He’s the only president ever to have been kicked out of his own political party while serving in office. It's a reminder that we aren't the first generation of Americans to have seemingly dire political divisions in front of us, and that is worth noting.
Among the opponents of President Tyler back then was John C. Calhoun, Senator from South Carolina. It is he for whom the late Lake Calhoun in Minneapolis was named. I had not previously been much aware of Senator Calhoun's pedigree, nor did I expend much passion on the recent controversial renaming of the lake to Bde Maka Ska. Calhoun was pro-slavery back then, but so were a lot of other political leaders, so I wasn't much engaged by the discussion. But then I read more.I was reminded again that from the very inception of our country, slavery was regarded as a moral evil by most politicians, regardless of where they lived or to which party they belonged. The real question was whether it was a necessary evil, perhaps an unfortunate fate, and perhaps an institution which would just die off naturally as time elapsed. But until Calhoun came along, no statesman tried to make the case that slavery was a good and noble thing, ethically. He did because he knew that it would be bad politics to have to be constantly on the moral defensive on the subject.
Here's what he said in a speech to the U.S. Senate:  "Let me not be understood as admitting, even by implication, that the existing relations between the two races in the slaveholding states is an evil. Far otherwise; I hold it to be a good, as it has thus far proved itself to be to both, and will continue to prove so if not disturbed by the fell spirit of abolition. I appeal to facts. Never before has the black race of Central Africa, from the dawn of history to the present day, attained a condition so civilized and so improved, not only physically, but morally and intellectually...  In the present state of civilization, where two races of different origin and distinguished by color and other physical differences, as well as intellectual, are brought together, the relation now existing in the slaveholding states between the two is, instead of an evil, a good—a positive good."
I don't much have an opinion about what the new name of the lake ought to be, but we are to be congratulated for eliminating the old one.
Fr. Mike Byron 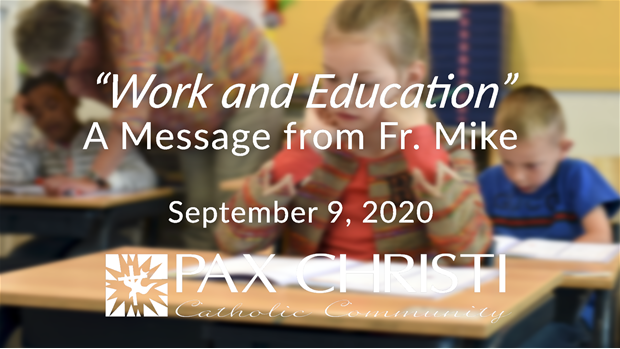 Information on dates and times can be found online
NAMI Minnesota (National Alliance on Mental Illness) is a non-profit organization dedicated to improving the lives of children and adults with mental illnesses and their families. For many, the current pandemic has added fear, anxiety, and stress to our daily lives. One healthy way to cope with these strong emotions is to reach out for support and help. For over 40 years, NAMI Minnesota has worked to promote the development of community mental health programs and services, change public attitudes about mental illnesses, improve access to services, and increase opportunities for recovery. All groups are currently being offered via Zoom: Family Support Groups, Partners and Spouses Groups, Parent Resource Groups, Young Adult NAMI Connection, NAMI Open Door Anxiety and Panic Support Groups, NAMI Connection, and more. Please see the NAMI Minnesota website for more information: https://namimn.org/support/nami-minnesota-support-groups.

CHILDREN'S LITURGY OF THE WORD (CLOW)

CLOW is back beginning September 12 and can be done online in the convenience of your own home.
The Children's Liturgy of the Word (CLOW) ministry enables children to participate in the weekend worship experience, to nourish and guide their spiritual growth, and to immerse them in the Word of God in ways that are understandable to them. All children ages 4 years old through 3rd grade are welcome to participate.They enjoy the Word of God on their level, shared prayer, and activities. There is no prior registration or fee for participation. Look for the CLOW link and participate in the Live Stream Mass. Along with the Children's Lectionary translation of that week's gospel, an easy-to-follow instructional sheet is available to guide families through the gospel and suggested activities. Contact Renee Dignan for more information, rdignan@paxchristi.com.

September 19/20
Join your friends and neighbors and help those in need by participating in the community-wide “Weekend to Unite Food Drive.” Drop off your non-perishable food items at any one of these safe donation locations during their designated donation times. All food will be donated to PROP Food Shelf.
Saturday, September 19, 10:00am- 2:00pm:
St. Andrew Lutheran Church, Prairie Lutheran Church
Immanuel Lutheran Church
Sunday, September 20, 10:00am-2:00pm:
Eden Prairie United Methodist Church
Pax Christi Catholic Community
*Safe donation drop off in parking lot of Churches. Please stay in vehicle; a volunteer will unload donations. Can't drop off during this time, visit PROP's website for open hours or consider a financial donation. Most Needed Items - CLICK HERE.

Presented by Laura Kelly Fanucci
Monday, September 21, 8:00–9:30pm, Via Zoom
There is no fee. CLICK HERE for additional details and to signup online.

Nine-Week Session Beginning:
Monday, September 21 at 6:30pm OR Tuesday, September 22 at 9:00am
The Seven Story Mountain tells of the growing restlessness of a brilliant and passionate young man, who at the age of 26 takes vows in one of the most demanding Catholic orders—the Trappist monks. At the Abbey of Gethsemani, "the four walls of my new freedom," Thomas Merton struggles to withdraw from the world, but only after he has fully immersed himself in it. CLICK HERE to register online.

LIVING IN THE SACRED ~ PART I

A RENEW Small Group Discussion Series; $20 per person
Six-week session beginning:
September 27, 6:30pm OR October 1, 10:00am
Living in the Sacred is a faith-sharing resource developed by RENEW International, based on Ronald Rolheiser’s book, Sacred Fire. Living in the Sacred takes participants on a deeper spiritual journey, exploring a mature adult discipleship by asking the question, "How do I give my life away?” Having moved through the “getting your life together” stage, participants have made life commitments in marriage or other relationships, including raising children, attending to sick or elderly parents or other relatives, pursuing careers, connecting to communities, etc. Living in the Sacred is about how we stay true to these commitments as disciples of Christ. Participants will do weekly readings and engage in online discussions via Zoom for six consecutive weeks. An option to do "Part II" will be offered in the winter of 2021. CLICK HERE to signup online.

Gospel of Mark Part One; $15 per person
Five-week session beginning:
September 28, 10:00am OR September 30, 6:30pm
Thought to be the earliest of the four Gospels, the Gospel of Mark is a fast-moving, vivid account of the ministry, suffering, and death of Jesus. Enter into a rich encounter with this preacher, wonder-worker, and messiah, whose very life delivered an urgent message about repentance, transformation, and the meaning of suffering in a life poured out for others. This five-week study covers Mark 1:1–9:32, providing an in-depth study of Jesus' ministry of healing and preaching. Weekly discussions will take place using Zoom. In addition, all participants will receive access to a bible commentary, study and reflection questions, prayers, and additional online lectures are included. CLICK HERE to signup online.

OUT OF THE LIGHT

Creating Sacred Space for Self and Others
Beginning October 6, 12:30–3:00pm OR October 8, 6:00–8:30pm
Do you long for silent reflection and discernment on social action? Out of the Light is a NEW eight-week program that is part of the newly revised Engaging Spirituality program. It’s for those searching for an undivided and connected life. It is an invitation to proactively live spaciously and gracefully while connecting with ourselves and others – especially those on the margins. It guides groups in developing spiritual practices (from the contemplative tradition) to ground their work of outreach and justice. All participants will participate in two Saturday morning "Days of Reflection" (October 3 and December 5), as well as in a seven-week discussion group. All gatherings will take place virtually using Zoom. There is no cost to participate. CLICK HERE to RSVP now.

This year's exhibit will be VIRTUAL!
Submissons due November 1, 2020
During these uncertain times, may you still find joy in creating and take this opportunity to join fellow parishioners in sharing your artistic gifts. This year’s exhibit, presented by the Pax Christi Art Committee, will be viewed by the community VIRTUALLY, at any time of day. Current Pax Christi parishioners—amateur, hobbyist, or professional—from ages 16 years or older, have the opportunity to show their fine art and craft. Guidelines and application procedures for this year’s Parishioners’ Art Exhibit will be available at www.paxchristi.com in October. Links to the virtual Parishioner Art Exhibit will be sent out via parish communications and linked to the website.

Sent by Melissa Nault on Wednesday, September 9 at 1:31PM